Forging a Knife From a Rail Road Spike

Details
Written by JPHrisoulas
Published: 28 May 2017

Forging a  knife from a rail road spike is something that has become quite popular of late...and here is how I do it. I make mine a bit differently than most other so, however a word first about RR spikes.

Most RR spikes have very little carbon will simply not harden enough to make a "using" knife...however there are a few that are marked "HC" that have a smidge more carbon that when properly heat treated can make a some acceptable knife. Contrary to popular belief the "HC" does not mean "High Carbon" but from my sources at Union Pacific RR hey mean "Higher Carbon"... from the way it works..I would say that the C content is about 40 points...BARELY enough to just start to get hard enough to take an edge,...BUT it is enough to harden to a point where the blade can be used..as I mentioned above..when properly heat treated. 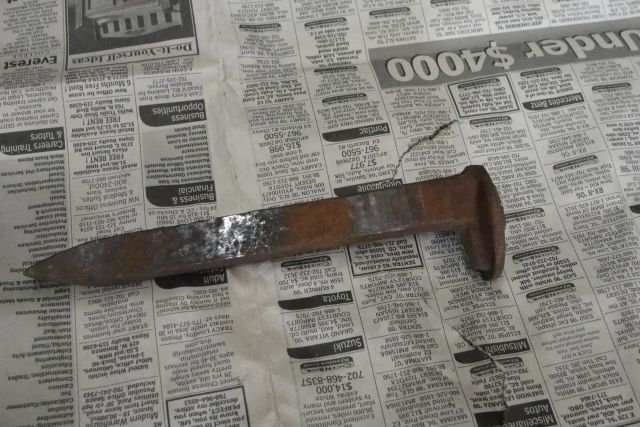 The spike is flattened, starting from the head and then working down the spike shaft. This will be the gripping area.

Carefully flatten head section and "blend" it into the start of the spike and continue to flatten this out until you have a flat area about 4" long.


Once this area is flattened and drawn out the thickness is checked for uniformity and overall "blending" of the head and grip area. 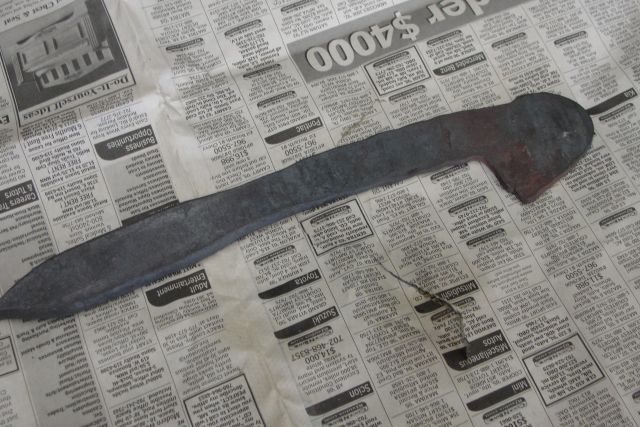 When this is done, flatten and spread the remaining spike to form the blade. It doesn't look like there is much material there to make a blade more than a couple of inches long but there is. The blade is forged flat and is widened and drawn out into a rough forged shape

As you can see there is a considerable amount of material in one of these spikes after all and you can forge out a pretty good sized "user" knife in a variety of blade shapes and styles.

Working from the tip back, start to flatten and spread the blade. Widen as you go and then start in on the distal taper.

When you get to the riccasso end, carefully widen this area and make sure the whole forging "blends" well into the shape you want.

After the blade is forged out and shaped into the rough shape of what you want to make, this rough forging still needs to be profiled to final shape.

Note: at this point the edge bevels have been formed ("packed") and the knife is pretty much in its final cross section. Now is the time to do any refinements and make certain that there are no drastic changes in cross section and that everything "flows" into everything else 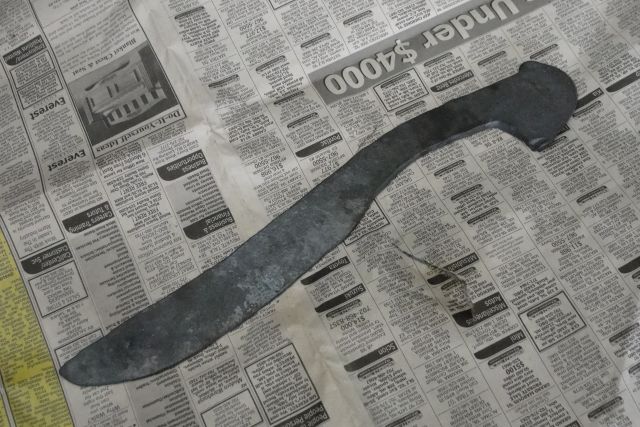 The next step is blade profiling and grinding the blade edges.. This is done either by hand with a file or a high speed grinder. Here the knife takes on its final "finished" shape. This will be a rather quick process as everything should be pretty well shaped by the forging, and the edge bevels , already being "set" by the hammer shouldn't take much time at all to clean up. 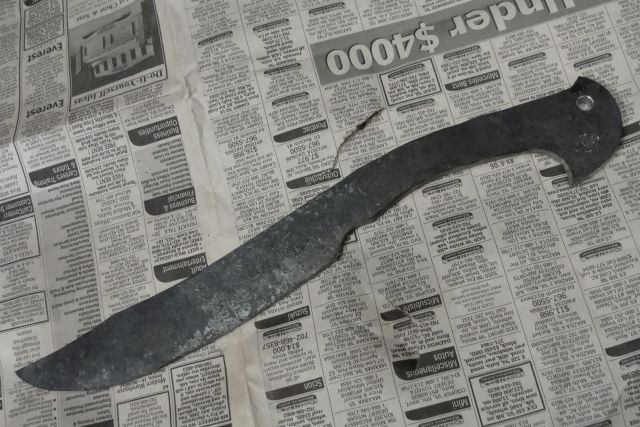 Now it is ready for thermal treatment.

Thermal treatment consists of two normalizing cycles, which is bringing the entire forging up to approx 1600 degrees F and letting furnace cool over night. You want this steel to be totally relaxed and soft before hardening.

After the normalization is completed (this is done to make sure the steel grain is not enlarged, and hence "ruined") the blade is ready to harden.

Now since this is a plain carbon steel that has what I feel to be the minimum amount of carbon in it to harden into a cutting edge, I have found that a water/brine quench works best. I use the same basic brine mix that I use when doing refractory thermal treatment (for a "temperline" using clay and 1045/1050 steels) except for a RR spike I use the quench at a temperature that is a good deal lower ambient room temperature instead of heating it to 240 degrees F as I do for the refractory methods.

The quench I use is a caustic soda brine mixed from common salt, sodium hydroxide and water. The blade is heated to non magnetic and then held there for 1 minute to ensure uniform heating throughout the thickness. After the soak the blade is removed and then quickly quenched point first to help prevent warpage.

Once the blade is hardened it is tempered to a light straw colour  (approx 440 degrees F.) and then allowed to air cool.

After cooling is is final ground, being very careful to make sure that the steel is not overheated..this could result in "soft spots" in the blade..and these are NOT acceptable 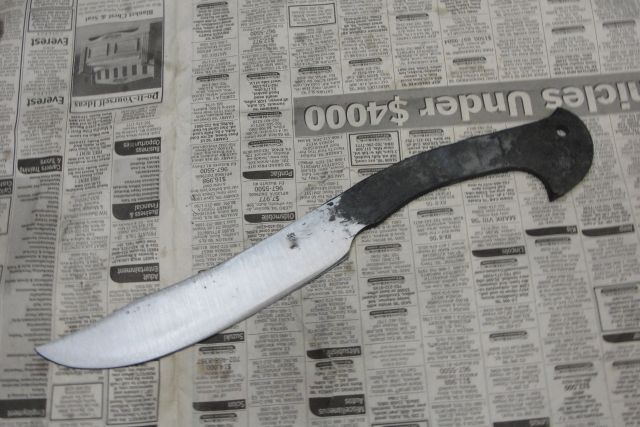 Here is the finished blade shown with the "raw material".. These spikes, when properly worked can make some very tough and serviceable knives..when properly heat treated.. They make a very unique blade that is only limited in its design by your own imagination!